Of these two famous creatures, the werewolves are the ones for which you will find the most abundant traditional stories. As a result, there have been some Storybooks all about werewolves, while the vampires have usually made their appearance in Storybooks about terrifying creatures, including vampires along with banshees, zombies, the chupacabra, etc. So, if you are interested in this topic, be sure to check out the Supernatural Creatures topic page also!

Online Resources: Werewolves. For werewolves, the best place to start is the Werewolf Legends from Germany by Dan Ashliman, along with Sabine Baring-Gould's Book of Werewolves and the Wikipedia article on werewolves.

Online Resources: Vampires. For vampires, the best starting place is the book by Montague Summers: The Vampire, His Kith and Kin (and Summers is a quite fascinating fellow in his own right; you can read more about him at Wikipedia). You might also find the Wikipedia article on vampires helpful. For the classic literary treatments of the vampire, such as Bram Stoker's Dracula, see the Gothic Literature section at Sacred Texts. 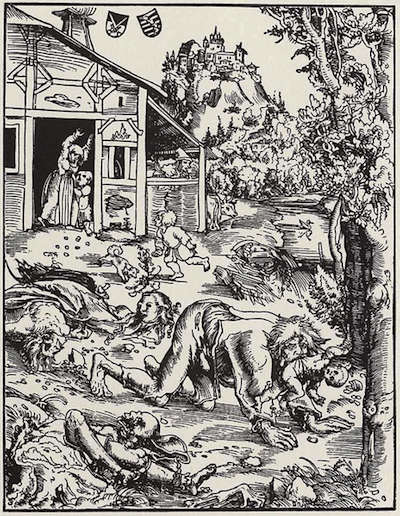 (woodcut by Lucas Cranach the Elder)

These three blog spaces — Announcements, E-Storybook Central, and the Writing Laboratory — were created for my online courses at the University of Oklahoma, but I am glad if the materials can be helpful to you, whoever you may be! Here are some links to help you in navigating this blog: